The Co-ordinates of Doubt (with Rupert M. Loydell, The Knives Forks and Spoons Press, 2017)

The Co-ordinates of Doubt, Review by Mike Ferguson, gravyfromthegazebo

Daniel Y. Harris & Irene Koronas do not just touch gloves in one of the strangest and most unrestrained attacks on any form of gender inequality—or indeed, the very idea of gender—that I’ve ever encountered.

They pair male and female historical figures, sometimes of this earth (Sid & Nancy) and sometimes not so much (The Devil and the Bride of Frankenstein) and slowly dismantle the coding which makes them so different. This is accomplished through rapid-fire automatism, or what looks like automatism; it takes real creative balls to break horizons like this, and not the variety that sits behind NPR and whatever is meekly new in this arena. Wait till you see Ted Bundy and Aileen Wournos combine in this hybrid language; they eventually become inseparable. A web ladle of human consciousness scorches the page, and they actually know what they are doing, obviously having devoured derrida and all the demurrers. Recommended for those who enjoyed “A Nest of Ninnies” by Ashbery and Schuyler but also want a psychic statement of out and out rebellion.

“Something Beyond Human and Gender Hybrids: A Review by John Allen of heshe egregore” (Edition du Cygne, 2016)

A shocking and unseemly intellectual debacle of the highest order, a teleological catastrophe, an epistemological scandal, a semantic horrorshow: Loydell-Harris have done it again…great stuff.

It takes off with the punch of a runaway rocket, over eventful horizons of the Lit singularity throw the chance encounter of a sewing machine with a rainbow in an abattoir of the senses…then lights the afterburners.

You’re watching the Dystopia Channel, rolling news with the strap-line: “everyone knows nothing is true.” The very latest updates on ancient wisdom from the R&D labs at Fraud Pharmaceuticals, sponsored by Rimbaud Weapons Systems. In-depth reports on scandalous illusions and luminous undoings. Authentic footage of the West going wester than west.

Esophagus Writ, Review by Steve Spencer, Tears in the Fence

The New Arcana, Review by Zara Raab, The Critical Flame 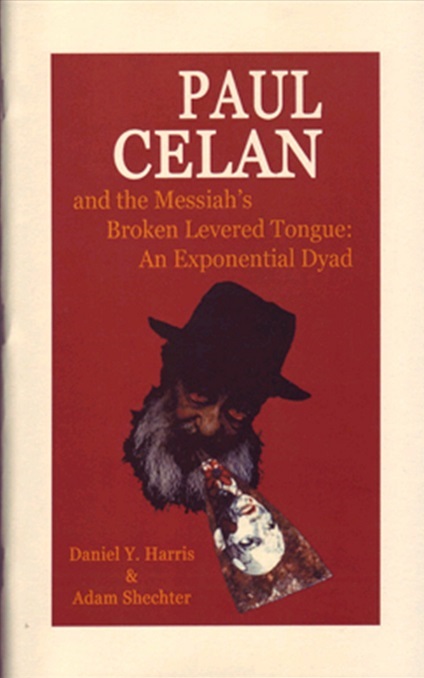 As Ron Sukenick so aptly put it in his last book “Mosaic Man,” Jews are both proto and posthuman. Adam Shechter and Daniel Y. Harris are possessed of that molten globe of fiery perdition that draws the brighter children of the tribe to the flame. Add poetry and oy! What can I say? Shechter and Harris have made another journey to the hellchamber of Jewish mystery/creation/death and came out in company, a big company that includes a lot of fried geniuses, but most of all they came out, and it’s good to see them.

I can’t begin to comprehend/surround all that is transpiring here in this Harris/Shechter collaboration/fusion—I’ll need other readings toward adequate bearings—but as Seine suicide Paul Celan hovers among these pages of prayerful heresies—“no Shabbos-always Shabbos”—I experience a language that wields “pen as scalpel,” and I feel flayed but grateful for this awakening into wild inquiry/attack. By way of thousands of years of Jewish history & of their own lives slashed out in poems & prose pieces of mesmerizing power, even as they wonder if they’ve gone too far, these two visionaries/revisionists have made something powerful & new here, something of charismatic complication. Oi Vey, & mazel tov.

Harris and Shechter have collaborated seamlessly, their individual voices and contents blending into an expansive and finely textured synthesis of soaring art and impressive erudition. Here we find elements of dadaism, surrealism, imagism, objectivism, collage, confession, even memoir. Providing a haunting backdrop—and perhaps giving the work its ultimate context and cohesion—is the poeticized memory of Paul Celan, an homage to the Holocaust, and a testimony on the history of persecution itself. This is quite an extraordinary book, in terms of both vision and execution, one that should leave its mark on contemporary literature.

—John Amen, Editor, The Pedestal Magazine and author of More of Me Disappears

From Shabbatai Tzvi to Paul Celan, it’s a room full of Jewish Messiahs! Shechter & Harris, leap in, grab, pinch, mosh—and thus make an ecstatic space for themselves within. This is a manuscript of an electrified, brilliantly nervous, heart-wrenching conversation that’s dripping with redemptive sweat.

With literary skill, Harris’s and Shechter’s words merge to form a unique and generous form of writing that anyone can connect and relate to—having captured an epochal longing that is a voice of our time.

—Sheema Kalbasi, author of Echoes in Exile, Director of Reelcontent and The Other Voices International Project

Paul Celan and the Messiah’s Broken Levered Tongue, Forward Fives: 2010 in Poetry, Five of the most important Jewish poetry books of 2010